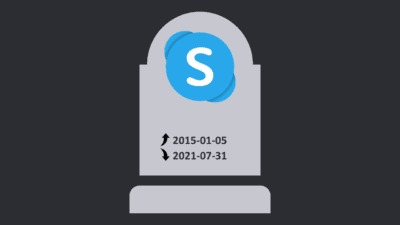 Skype for business, end of the road

This is the end of another era, but it isn’t the first. To be more specific it’s the third. Let’s go back and look the development of Communication in Microsoft Office.

Let’s begin at the first business focus communication tool, few might have even heard of it, there isn’t even a dedicated Wikipedia article in english, although a draft exists in french. Anyway, the story starts in 2005 when Microsoft released a tool with instant messaging, Voice of IP and video conferencing. This tool had rich text chat and video meetings.

Lync, makes it popular and useful

In 2011 Microsoft released to Lync as a successor, this had many improvements. In a later update it even got persistan group chat. One Major improvement was a mobile app to make you mobile.

Efter Microsoft purchase of Skype they implemented new protocols and features in it’s release of Skype for Business in 2015. This introduced better and more stabel video communication.

Thank you for your service!

Skype is not completely gone to be honest. For those who have a local server it got an update in 2019 and will continue working until 2024, extended EoL 2025 (Source: Microsoft).

Finally we got Microsoft Teams. Realeased in 2017 and now it’s the official successor of Skype for Business Online.  For how long? Well only time will tell.

I will not write more about Teams in this article, but there will be many of them on this page.

This site uses Akismet to reduce spam. Learn how your comment data is processed.